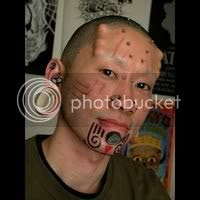 Steve Haworth grew up in family that owned a medical equipment production company that devised surgical tools still used in operations today. Knowing this, it's not too shocking the trajectory his life has taken. Known as the pioneer of 3D Body Art, Steve started his career in body piercing. Growing up in a house of inventors, he eventually took the trade to the next level designing superior piercing tools and techniques, creating new styles of body jewelry, designing shaped dermal punches and jewelry, and perfecting surface to surface piercing. But that wasn't enough. Over the course of 15 years as an underground cult artist, he changed the world of body modification from belly button rings and tongue studs to 3D Implants, Transdermals and Electro Cauterary Branding. Director Larry Silverman follows Haworth for 5 years of his life in Phoenix AZ where he owns world renowned piercing salons and has partnered with several of his clientele to begin a flesh hook suspension group called Life Suspended. Flesh and Blood is a fascinating look into the world of body modification, the people who champion the movement, their motivations for participating and Steve Haworth's integral place in its evolution. Oh, and it IS NOT for the squeamish, faint of heart, or easily grossed out! Cowboys and Communists is a story about two conflicting societies trying to keep their ideals alive. The spotlight is on a noisy, debacherous, late-night restaurant in East Berlin, White Trash Fast Food, where film-maker Jess Feast is also a waitress. Wally Potts, the American owner of White Trash sets up shop in an established apartment building that has poor insulation and tenants who have lived there since Communism. Frustrated with the oppressive regime in the States, Potts fled to East Berlin to live his version of the American Dream in East Berlin. Horst Woitalla, a tenant and former journalist for East Germany, believed in the Communist way of life and in an instant, had everything he knew taken away. Woitalla is determined to restore silence to the apartment building by trying to get White Trash evicted. I couldn't help but side with the articulate, sincere and interesting Woitalla; crossing my fingers that he would successfully have White Trash thrown out on its pretentious wanna-be artsy ass. The trannies, bands and burger eating contest were really not that impressive or original. Ultimately, Potts screws himself by not doing his homework. White Trash is ordered to close down due to zoning laws and noise ordinances. But what I want to know is: Who opens a business in an old, East Berlin apartment building with aging tenants from the Communist Era and neglects to do any kind of research?

In my opinion everyone may browse on this.