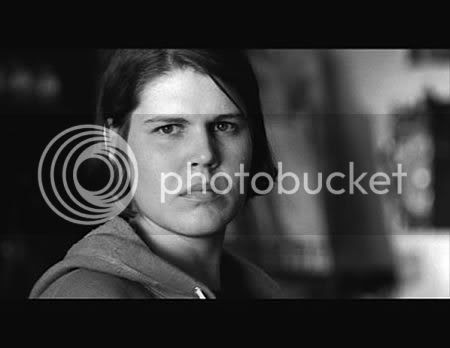 Bitch (Keira Leverton), an antisocial record store clerk falls for a rebel (Juan Garcia) and puts herself through the paces to impress him. Along the way, we come to appreciate Bitch’s loathing towards shallow youth culture- exemplified by an MTV-style beach show, angsty hipsters and how anything nostalgic is all the rage now among young people.
Surrounded by by-products of a society that attempts to corral young people into a homogenous way of thinking, Bitch is rather irritated by the world around her, to say the least. Her deadpan expression- holding just the slightest shade of contempt- is priceless, as she lashes out towards the pop culture clichés she encounters. A hilarious opening sequence involving Bitch and a hotshot roller boy straight out of an American Apparel ad alone makes the film a gem. She’s something of an anti-heroine, a champion of individualism, which makes it all the more heart-breaking when she herself one day finds herself deeply desiring acceptance, and changes who she is to gain it.
Leverton and Garcia play off each other well as the unlikely couple, and it’s intriguing to learn just what sort of circumstances must unfold to bring two such abrasive personalities together. 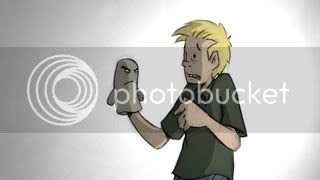 Puppet, a hand-drawn animated short tells the bizarre tale of a young man whose sock puppet morphs into an instrument of his own fear and masochism.
“The masochist will create a separate entity to accomplish a repulsive level of self-abuse” – Freud. The quote opens up the film, aptly summing up its central theme. Beginning innocently enough with a smiling man admiring his cute little bit of handiwork, the film quickly descends into a nightmarish chain of events in which the puppet turns on the young man, who is unable to escape his creation’s ill-treatment. A dark and lighthearted feel coexist- the sweet-faced look of the main character, and the fact that his enemy is merely cartoonishly menacing in appearance make the graphic and seemingly unending violence all the more unsettling. Complemented by a superb musical score, Puppet comes off as something of a character study, incorporating issues of identity, the creative process and self-loathing as it progresses through one increasingly hard-hitting image after another in rapid succession. 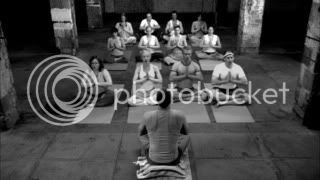 Set during a New York heat wave, OM cuts between a group of yoga students and a bike messenger, two radically different settings in which a serene and focused state vs. an anxious and distracted one are juxtaposed.
It would be expected that the former state of mind would more likely be found among the students. But though outwardly they appear to be at peace, as we are allowed to observe their personal thoughts- all of which are rather oppressive and put on display in intense, concentrated scenes- this proves not necessarily to be the case. On the flip side, though the messenger is understandably showing signs of great stress, nevertheless there is a certain sense of calm to his swift trek through the streets of Manhattan as he deftly dodges one obstruction after another.
As the film ties the two stories together, the reality of the human condition- of which various aspects are touched on throughout- comes at us full force in the end. 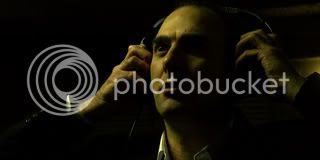 Press Play is set in the near future in a Big Brother-esque society in which art and music have been banned by the government. Alan Osborne (Michael Gerard) has become involved with an underground group that gathers at night to secretly enjoy what recordings are left, and after a raid, wrestles with his dilemma as to whether to make a stand.
With minimal dialogue, the film often communicates more through action (an opening scene of a violin being smashed to bits is gut-wrenching) than it does through words. A facial expression or a gesture can say it all, and though the entire cast clearly has a hold on this approach (without a doubt largely in part to excellent direction) Michael Gerard is particularly adept at utilizing these means to convey Osborne’s inner life and struggles. Moreover, Press Play’s transition from a reserved tone to that of navigating through the extreme emotional highs and lows experienced by the characters is guaranteed to hold the viewer’s attention right to what is a decidedly inspiring end.

PPL B TXT’N 2MUCH
Nick Puga 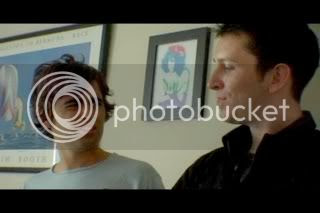 In their hip-hop music video debut, “The Sock Puppets” speak the truth on the epidemic of text messaging that has grabbed a hold of society.
Hysterical and spot-on, PPL calls us all to the carpet for our newly acquired bad habit- even acknowledging that they themselves are guilty of it. In a variety of ridiculous scenarios (some of the funniest being completely irrelevant to the matter at hand and obviously only included for their own amusement) the high-energy duo poke fun of the laziness and insecurity often behind the urge to fall back on non-verbal communication, as well as give their own two cents on when it’s ok to resort to it. What’s more, they’re actually pretty damn good rappers to boot.
PPL gets us to laugh at ourselves and admit that we all go overboard with the T9 sometimes. And though it can’t possibly be eliminated, nonetheless it may actually be a good way to at least get people to keep the tendency a little bit more in check in the future. That being said, I myself am so all about this video, I’m sending a mass email about it to everyone I know ASAP. 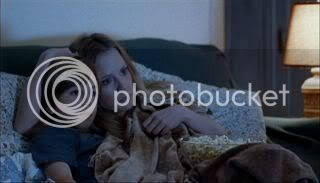 The short thriller weaves through the mental impressions of a young boy (Joshua Israel), centered on his fear of an ominous red door. Starting with a scene out of an ideal childhood, the film abruptly plunges into darker territory, revealing one truly messed up family and packing a punch in a mere 9 minutes.
The plot here is not plainly laid out and relies heavily on the terrifying portraits it paints based on reflections of the boy to suggest what exactly has happened to him. Close attention has been paid to composition here- ghostly lighting (the disparity between the high- and low-key illumination of the door and all that surrounds it is downright spine-chilling) and some sharp camera work contribute to its sinister quality. This, compounded with believable performances, especially that of Joshua Israel, effectively do the job in leaving the viewer thoroughly rattled. 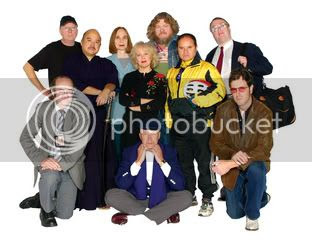 What makes a good documentary? There appears to be universal agreement on four points: 1) subject matter the general public normally does not have access to 2) interesting people to expound on the topic with first-hand knowledge 3) a degree of tension and 4) most importantly, storyline, storyline, storyline. Strictly Background, which takes a closer look at background actors, hits the mark on all four necessary components.
The people that make up the crowd in a movie, appear behind the lead actors as they bond over lattes in restaurant scenes- these are the background actors, or “extras”. They’re crucial in providing a greater sense of authenticity, and yet due to their high numbers (estimated to be around 40,000) and the nature of the work (for the most part, their job is to blend in, not stand out), they are unknown in the world of film. The ten actors who appear In Strictly Background- all seasoned professionals- are finally given a chance to speak about life on set from their standpoint.
From the get-go, it’s clear that Connell has assembled a lively and varied bunch, all of whom enthusiastically offer their angle on the profession. It would be easy to exploit these personalities, but the film shows nothing but tremendous respect for its subjects. After being taken through the obligatory introductions and ins and outs of the business (casting agent Jeff Olan’s straightforward, man-behind-the-curtain outside perspective about the realities of background acting is a nice touch), we quickly become acquainted with the group through their anecdotes and inside scoops on career highs and lows. Each individual is distinctive from the next and all are extremely likable- naturally we become invested in them and are touched by their achievements and disappointments.
On account of these engaging personalities and the dashes of humor, the film gets off to a light-hearted start. But as it progresses and we are drawn deeper into the world of the extras, one truth becomes evident- the very fact that they’ve all been at it for years serves as a reminder that they haven’t quite gotten that break that allows for the opportunity to really shine as an actor. Therein lies the conflict; the tension manifests in the actors’ discouragement- be it by the fact that they are barely scraping by, not treated well on set, or not feeling creatively fulfilled. Of course, the more we see what wonderful people they are, the more we want them to succeed, and we hope for a sign that their conflict will be resolved.
And so the question becomes: is continuing to do background work really the best way to move up? Is the work helping them or hindering them? There’s no argument that starting with extra work is a good way to get on a set in order to better understand the process of making a film. But it only takes a few jobs to get a handle on that, and this group has been on countless sets. Yet there is very little mention of acting classes, taking on more prominent roles in independent films, or other such means actors use to develop their craft, get more performance time, and ultimately, get noticed. I was baffled on this point: it’s one thing if an actor is content with the excitement of just being on a big set (though one would think it would lose its novelty after awhile) and sees it as a lifestyle and way to make a little cash on the side. In some instances, this looks to be the case. But it’s quite another if they long to boost their income in their chosen field or to further demonstrate their ability. And if part of the job is generally to not be conspicuous, how likely is it that their unique qualities and abilities will be showcased- a must in order for them to move up to the next level?
Seeing these incredible people we’ve come to care about and believe in make little headway with no visible light at the end of the tunnel becomes discouraging- and positively heartbreaking when we see the extreme toll it takes on a few. Even if they are content where they are at, after witnessing the grind and recognizing their potential, we still want more for them. They are in no doubt some of the hardest working people in show business- but one can work hard on a treadmill too, never moving ahead. There’s that longing for them to sprint out onto the open road and consider other lines of attack to achieve their goals. However, when no evidence of this happening any time soon is offered, the film starts to sag somewhat.
Fortunately, this low point doesn’t last for too long; passion and optimism carry the group through. With heads held high they are willing to take on the next challenge, and we are left feeling confident that no matter what road they take, they will go on to live rich and fulfilling lives. And the fact of the matter is, these actors all shook up their career game plan by participating in the project. So as far as that big break? It could very well be this film.