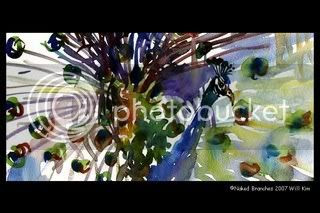 And the plot synopsis:

While a male peacock and a female peacock (peahen) exchange a spiritual, love talk, a snake makes his own journey to connect the two lovers and to take away the peacock's desire till the last moment of the peacock's life. Emptiness is what the snake leaves behind after he accomplishes his wants in this film, 'Naked Branches.' The filmmaker Will Kim uses watercolor to explore his one hope that's vanished into air. 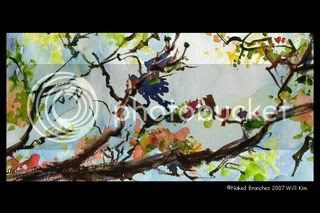 Naked branches are, of course, without leaves. They are a foundation without that which they support. In our contemporary Western culture, we often strive to impose a linear plot upon any film we experience, whether there are spoken words or not. Will Kim has given us a reprieve from that with the lyrical Naked Branches, which is an experience much closer to that of dance.

The warm realm of recognizable characters, an almost Eden-like world of peacock and peahen flows through a life-altering encounter with a snake that is violently depicted through negative space…all seamlessly and liquidly woven together with Kirin Kapin’s music so that what Kim shares with us isn’t just a visual experience. Instead, it is able to seep in through our ears and pores, bypassing our intellects, and affecting us on a very emotional level.

And the plot is:

At 65, Jack (Bob Hoskins) is consumed by past guilt and regret. His strained relationship with his son is severed on the death of his wife. Jack is lost and alone in his self loathing, and spirals into decline. Hope arrives in the unlikely form of eight-year-old, Florrie, a soft-natured girl who moves in next door and delights in his long neglected racing pigeon Ruby. When his glamorous French neighbor, Stephanie (Josiane Balasko) takes pity on him, Jack cannot help but fall for her charms. Encouraged by Stephanie, Jack helps a local hooligan by giving him his prized Ruby. When an innocent friendship with Florrie is thrown into question and Stephanie reveals a well kept secret, Jack’s life is thrown into turmoil once again. Jack finally cracks, consumed with sadness and humiliation, until tragedy forces him to confront his prejudices, face his fears and challenge those around him in a bid to win back Stephanie’s love.


Most of us love to play detective. Just look at the popularity of shows like Law and Order. All versions of Law and Order. We love to put together the clues in the comfort of our loungewear and accuse strangers daily and feel good about how we solved the crimes brilliantly. It is a powerful feeling. I’m as guilty as anyone. With Ruby Blue, Jan Dunn taps into that very human tendency. This tendency can lie where it is in our loungewear, progress out of us to a bit of gossip with another, or steamroll into to a full on slander fest in the true spirit of The Children’s Hour where law enforcement is involved and peoples’ lives are literally at stake. Ruby Blue has us on the edges of our seats, and seeing ourselves everywhere we turn.

There are four pivotal characters: Grumpy Jack (Bob Hoskins, who has never been better), the glamorous Stephanie (Josiane Balasko), Ian the hood (Jody Latham), and eight-year-old Florrie (Jessica Stewart). Three are fronting…the world knows them only by façades. In reality, the three fronters have so much more on the inside than their façades let others get away with thinking they are.

The fourth, Florrie, is the key to unlocking all of them. Florrie is beautiful on the outside, beautiful on the inside. With Florrie, what you see is what you get. She keeps it real. She doesn’t ever see the façades to begin with because she doesn’t have one of her own. She sees that Jack is a sweet, if lonely man in need of straight talk….She tells him that he smells because he smells. She tells him that if he were nicer, people wouldn’t call him “Grumpy Jack.” Her attitude is infectious. The characters start to open their eyes to one another.

Likewise, Jack gives Ian some plain talk, probably the first he’s had. Ian springs to life almost magically, at the opportunity to take some responsibility with the prized Ruby Blue. It might, in fact, be hard to believe his 180º turnaround had we not heard earlier from his little sister that he’s actually nice...he just fronts. Most of all, it is Ian that eventually gives Jack the key perspective on what is important with Stephanie, who starts out good and just gets better the deeper you dig. One just has to accept her issues. See Ruby Blue just for Josiane Balasko’s performance, if for no other reason, by the way. She is a powerhouse.

What is so fascinating in this film are the clues that Dunn sprinkles for us as viewers along the way. We start piecing together Jack’s past…what has he done that is so horrible that his own son kicks him to the curb the very day of his wife’s funeral…that he won’t let him see his own grandchildren…ah…he resists the temptation to go into the pub…and again he leaves a bottle of whisky untouched with great effort…and is quick to lose his temper….

We also play detective with Stephanie…did her daughter just say she was talking to her mother? The daughter just mentioned a secret that her mother tells people and they always leave afterwards. Jack comments to Stephanie about how strong her hands are….

We are not alone…most of the neighborhood has been playing dime store detective just like we have. They have been whispering in their loungewear, piecing together their own clues about Jack, and they have decided that they sum up to him being a dirty old pedophile, instead of being happy at being given a second chance by fate and his own goodwill at becoming a decent human being.

How ironic that due to the neighborhood whispering, Florrie’s mother leaves her with her friend’s neglectful mother, who in turn runs off to the pub leaving the two unsupervised to wander off and get into trouble.

Dunn does a beautiful job of utilizing juxtaposition in a scene where Ian’s mother is judgmentally griping about her erroneously drawn conclusions about Jack’s supposedly inappropriate behavior. She rants on and on while swearing in front of her 8-year old daughter and halfheartedly forbidding her to watch violent cartoons.