We would like to welcome Ms. Meredith Julian to our list of festival bloggers. Ms. Julian is a highly accomplished actress and we are excited to have her as a part of the team!
Shane 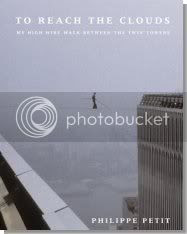 There's no doubt that "Man on Wire" was the most compelling of the documentaries I had the pleasure of seeing at the True/False Film Festival. The story behind Phillipe Petit's tightrope walk between the twin towers of the World Trade Center was at times frightening and fantastical and at others inspiring and even quite funny.
Petit's lifelong motivators have been entertaining, living on the edge, defying the rules. He did all three when he succeeded at his 45-minute walk between the two tours without a safety net. He walked back and forth between the buildings eight times, and even lay down and kneeled in the middle of the rope for a more dramatic effect.

The execution of this stunt required a team of accomplices. One wonders from where these characters came but their account of this event, and of Petit as a human being, added a great deal to the storytelling in "Man on Wire". I was saddened to discover at the end of the movie that Petit and his "team" are no longer in contact with one another. In a question and answer session following the film the director, James Marsh, explained that after this huge feat and with his first taste of real fame, Petit cut off relations with his friends and cohorts.

Though fame seems to have played a part in harming the relationships and friendships behind the act, Petit himself proclaimed it wasn't an option not to attempt this feat. He knew he was teetering between life and death, as a mere puff of wind could have led him to his inevitable death. Petit explains that he would rather die in the middle of the pursuit of his passion than to not pursue it at all. One can see the slightly crazed joy that this man finds in his passion, and it is truly inspirational, if a bit uncomfortable, to watch.
Posted by Indie Filmfestival Blog at 5:42 PM