I have been looking forward to this festival for a few months, and lo and behold..... The flu season has struck most of my LA based writers. LOL! Lara Berman was able to pull herself away from family and a graduate school exam to attend part of the festival for us. Thanks Lara!

Many of the short films at this year’s International Film Festival, although filled with heart, were regrettably forgettable.

Just Breathe, a series of short films that focused on a failing marriage, attempted to show that just because a marriage comes apart does not mean the family must cease to exist. This message was eloquently conveyed to the audience after the screening by Julie Rappaport, the film’s producer, co-writer and star who was in attendance. But, the message grew muddied in the execution. Unbelievable acting, a creepy ending and corny interjections of self-help made the film off-putting and kept the viewer at a distance.

Over before it began was Masterpeer Theater, a 2-minute film answering the question of what would a dog’s version of “Masterpiece Theater” be like. Amusing graphic work made our master-mutt-of-ceremonies entertaining, but the quick delivery, thick English accent and unsynchronized lips left many jokes incoherent. Nevertheless, second and third viewings of this whimsical romp would undoubtedly reveal clever quips and nuances imperceptible to first-time watchers. Any dog lover will appreciate this pup-ular version of an American classic. 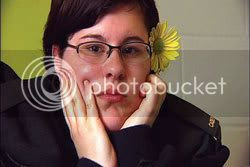 The stand-out piece of my evening at the festival was a Canadian documentary about overweight teenagers called, Generation XXL, directed and written by Teresa MacInnes. Unlike many films about obesity, there is no underlying agenda or implicit disapproval conveyed. Instead the viewer meets young men and women who are smart, sensitive, self-aware but challenged by food. They choose to attend a “fat-camp,” but when they arrive there are no drill-sergeant exercise instructors or food police monitoring the dining halls. Instead, the teens are taught “mindful eating;” they face hurtful comments people said to them in the past and are taught that they can choose whether to agree or disagree with those statements.

The cast of adolescents is exceptionally wise, articulate and honest. That vulnerability allowed intimate access to the characters and, matched with the film’s superb editing choices and poignant selections of scenes and sound bites, involved the viewer immediately. It’s no wonder that this film won the documentary category at this year’s film festival. Instead of basing all success on pounds lost, viewers cared about the participants and felt invested in their journey to address the true root of their food problems.

Dietitians and studies spout reasons why young people today face obesity issues, but audiences will gain compassion and understanding by listening to this thoughtful piece featuring the exceptional members of generation XXL.

Thank You Lara Berman. It is always a pleasure to have you on board!
Shane
Posted by Indie Filmfestival Blog at 10:05 PM