Being relatively new to the independent film festival market, it has been rather exciting covering festivals at various venues throughout the So. California area. Such is the case with the 2nd annual Brilliant Light Film Festival, which takes us to the hub of the film making industry, Hollywood. Located on Melrose and N. Van Ness Ave across the street from the Paramount lot and the Hollywood Forever Cemetery, sitting on an 11 acre lot is the Raleigh Film Studios.

The 12 sound stage studio, one of the largest independent film studios in the nation and a leader in promoting and assisting visionary artists in film, television and commercial production, is the host to this years event. Having a rich history in the film industry the studio first established itself in 1915, with renovations in 1979 it has since become a studio preserving the best of its Hollywood traditions.

Screening a wide range of features and shorts, most of the action during the weekend, I was able to catch the Friday night, North American Premiere of Yai Wanonabalewa – The Enemy God. After a brief sign in at the security gate, a little stroll through the studios lot, and a pleasant greeting from festival hosts, I casually made my way to one of two screening rooms. Now, these are the lavish, modern screening rooms that Hollywood execs, producers, film makers and big name press affiliates congregate to view the most current productions, before being released to the mass market, accommodating to say the least. 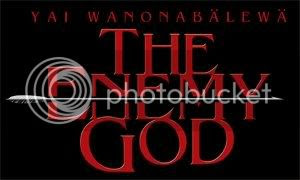 On with our review, living in almost complete seclusion in the Amazon rainforest located in parts of Brazil and Venezuela, are the Yanomamo people. The pre Columbian forest footmen commune in small bands or tribes, having little contact with the outside world, their numbers continue to thrive as well as their cultural and religious practices, which is the primary subject matter in the new film, The Enemy God.

With a very limited film crew and support from surrounding tribes people other then the Yanomamo, writer and director Christopher Bassett tells the true story of Bautista a Yanomamo shaman. Well, it’s not actually Christopher’s story, its more Bautista’s story, and in a much broader sense, an account of his people, and a fascinating story it is.

The film wonderfully photographed by John Petrella is deeply rooted in religion and shamanism, which for many indigenous culture, there everyday lives are based and dictated by such practices, which for many of us we often forget or overlook this one aspect of humanity. Superstition, theism can be the basic foundation is determining the daily living and the fate of its believers.

“The trails of my memory are stained with blood” a revenge killing on the red blood village, “we will attack at dawn” these are the opening sequences narrated by Bautista himself. We find a small group of men from Thriving village, carefully and meticulously trudging through the thick green moist dense Amazon jungle. Like a clandestine covert operation the men armed with spears, slowly trek their way to the unsuspecting village, guided by forces beyond the cosmos. No one is spared and the village is burned down, like prized trophies they capture a few women and bring them back to their village.

The film with its narrator moves back and forth between the past and the present, it is the 1990’s and the people still have large memories and stories being told. Since he was small, the spirits have had a profound impact on Bautista’s life, calling out to him and guiding him into becoming a shaman leader. It is these same good and malevolent spirits that guide him and his people on a daily basis. The spirits as beautiful as they are can be just as evil causing calamity, illness and death to its yielding followers.

Beyond all the shamanism and tribal warfare Bautista’s story thickens like the jungle, as a young woman from a neighboring village named Yellow Petal, begins a relationship with one of his villagers. Divided over traditions and customs, tensions boil over as Yellow Petal wants to stay in Thriving Village and leave her abusive husband.

In the confrontation between the two villages which is in the present, different parties emerge out of the green thicket, one being the government. The other an American family that has taken residency with the Yanomamo people, dedicating their time and their lives in helping the Yanomamo carry their way of life in the Amazon jungle.

By no means is The Enemy God a national geographic, anthropological study or approach on a large native tribe in South America. Instead what we have is a well developed plot involving character change and confrontation as it explores the Yanomamo’s domestic relationships, tribal customs, and beliefs.

On the surface The Enemy God, runs on similar ground as the 2001 release of The Fast Runner a story regarding the Inuit people in the Canadien Artic. Yet, unlike The Fast Runner, which their story is developed and centered around an Inuit legend, The Enemy God is rooted on the actual true life story and events that shaped and characterized a shaman’s life and his people.

Coming from southwestern Native American cultures (Navajo and Pueblo of Isleta) it was easy to gravitate and relate to all the different aspects of the Yanamomo’s religion, some based in animalism. These are aspects that are explored in the daily routines of the indigenous people, and this element was well manifested through out the film.

Even as the last frames, brings the film to a conclusion, there is definitely a palpable feeling that this story doesn’t end, and it doesn’t it. There are many parties and characters that surround and support Bautista’s experiences, take for example the English family, the Dawsons, their fifty year residency with the Yanamomo, is a story worth exploring all on its own. Thanks, to film maker Christopher Bassett and most of all Bautista, for bringing his story out of the jungles of the Amazon and into the conscious platform of the American movie going audience.

Cool, there is actually some good points on here some of my readers will maybe find this relevant, will send a link, many thanks.

It can't really have success, I consider like this.