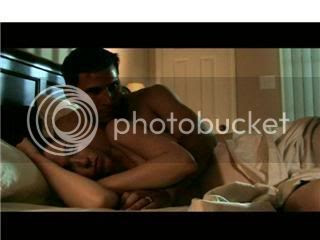 Garrison follows two soldiers as they search for their AWOL superior. Valderrama, who served with the 82nd Airborne in Afghanistan, got the germ for his movie after his father sent him clips of happenings at Fort Bragg, NC. Valderrama said he had seen a lot of war movies but none had ever gotten it just right especially when dealing with Post Traumatic Stress. He admitted he made the movie for his fellow soldiers. He said he hopes the movie is well received at the G.I. Festival in July.

Garrison takes place over three days with a few occasional flash backs within flashbacks for relationship purposes. The use of black and white is effective. I admit I am not a military person, so the chain of command stuff was a bit confusing but maybe for a military audience it makes the film more realistic. Another quibble is giving too much plot information too soon. The audience knows what happens before the military. It would have been more suspenseful if the audience and soldiers, McManus and Cain, discovered the clues together. There is only one twist at the end. 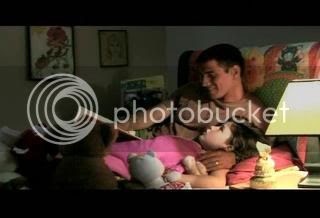 The locations seemed authentic even though Valderrama admitted finding old hospitals, classrooms etc... to shoot in San Antonio was a bit of a challenge. He had no access to actually military sites. The film was shot on a Canon XL2 and scored by Douglas Edward. I didn't care for the songs over the credits but the score accentuated the movie. 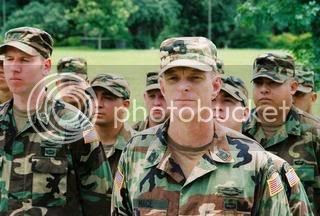 This was not an easy film for me to watch since I have two family members who have either been to Afghanistan and/or Iraq and another nephew who leaves in June. But I'm sure Valderrama knows his audience. 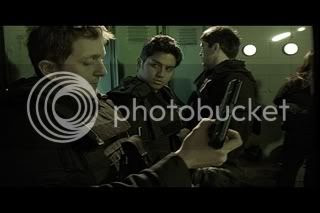 For me this film was a cross between Plan 9 From Outer Space and a poor imitation of the television series La Femme Nikita. It is set in 2055 but the look was cheesy sometimes and downright 2008 at others. It was especially the latter in the big end scene. The plot is the age old man versus machine and for me the most interesting character was the Sex-bot. There were too many characters and the conflict between the humans was overwritten, trite and at times overacted. But, I felt the Major was winking at the audience during his scenes. On the surface, Afterbirth appears to be a lab mistake gone even more wrong when the stuttering, and belittled janitor is left to dispose of a beaker of mysterious blue liquid and a fetus from a back room abortion. The end result is murder and mayhem in the standard horror mold.
In a running time of nine minutes, AFTERBIRTH, takes a stab at abortion and stem cell research or does it? See it and decide.

THE HOUSE
Written/directed by Douglas Elford-Argent

The House, revolves around a brother/sister burglary team and a dead body. The pair is interrogated separately but the police has a hard time convincing each of them to give the other up. Not much new here, not even the twist. It felt like the eight minutes it lasted. The script wasn't exciting but the actors gave it their best. The camera work was good though!
Posted by Indie Filmfestival Blog at 12:52 PM

This can't have effect in actual fact, that's exactly what I believe.