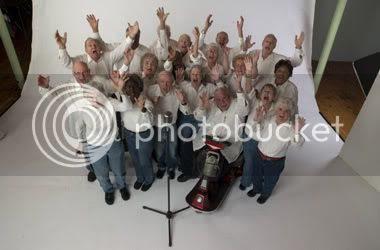 At first, it was hard to know what to make of the ninety two year old woman in a tuxedo shirt and jeans whose deadpan rendition of The Clash’s “Should I Stay or Should I Go” made up the opening scene of Stephen Walker’s courageous new documentary, Young at Heart. I had heard of the film only as a charming, feel-good piece about a chorus of quirky seniors who performed rock and roll songs with the implicit message that growing old doesn’t have to keep a person from pursuing her dreams. For me, however, the reality of experiencing a ninety two year old woman singing “Should I Stay or Should I Go” was instantly more complicated than that. It was a little bit morbid. It was a touch uncomfortable. It imbued me with a sense of impending doom. And then I laughed. And laughed again.

Indeed, Walker’s debut film, which documents the lives and co-operative efforts of Young at Heart, a chorus of twenty four seniors aged sixty nine to ninety two, to prepare for their upcoming “Alive and Well” concert with the help and encouragement of chorus director Bob Cilman, does not hesitate to embrace the darkly humorous side of this group’s unusual and oftentimes insurmountable-seeming enterprise. At moments it also appreciates as well as dignifies the daily struggle of many of the chorus members to simply show up to rehearsal three times a week, let alone master the diverse and challenging pieces that the charismatic, rigidly un-patronizing Cilman prescribes. (For “Alive and Well,” these include James Brown’s “I Feel Good,” Sonic Youth’s “Schizophrenia,” and Allen Toussaint’s “Yes We Can Can,” a song containing a daunting 71 iterations of the word “can.”) When shortly before their concert, two key chorus members die unexpectedly of health complications, the film strikes a remarkable balance between mourning the group’s losses, and finding honest inspiration in the resolve of the remaining members to carry on with the show in spite of them…or, as we discover, perhaps because of them. For this reason, it is difficult to unequivocally condemn the occasional off-notes of what seemed to me to be ill-placed humor, chiefly in the film’s collection of MTV-style videos featuring clownish, caricatured performances by the chorus of such hits as “I Wanna Be Sedated,” “Staying Alive,” and “We’re on a Road to Nowhere.” All told, this is a film which explores a way of growing older that most of us didn’t realize was possible. Like most things worth doing, it doesn’t always feel good. It does, however, feel real.
Posted by Indie Filmfestival Blog at 2:14 PM