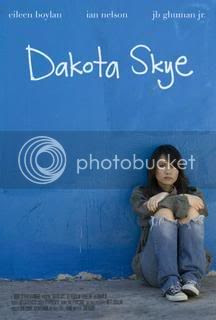 Before I begin this review let me warn you that Dakota Skye is a film about a girl in high school. Now you must erase every beloved high school movie of recent decades such as Fast Times at Ridgemont High, The Breakfast Club, American Pie, etc. from your mind. Now, if you can, imagine a high school film that is so honest and engaging that you wish it wouldn't end.

Dakota Skye is a teenager with problems similar to most girls her age, except she is cursed with a super power she hates. She knows whenever someone is lying to her. The opening scene of the film is Dakota's graduation day. But her story begins with a flashback of the year before.
In her junior year Dakota is disillusioned by her boyfriend's narcissism, and bored with her friends' obsession with SATs and the future. She is like a walking time bomb ready to explode from the all the deceit. Although she resents each of them, she holds on to them because they are all she's got.

Nearly at end of her rope, a miraculous incident occurs; Dakota meets Jonah, the first person she's ever met that does not lie about anything. Immediately the two are attracted to each other but there are a couple problems. Jonah is her boyfriend's best friend and despite the fact the she tries to deny it, Dakota is falling for him. Jonah feels the same way and tells her. Now Dakota must decide if she should stay in her completely uncomfortable comfort zone or take the risk and trust Jonah with her heart.

This film was my favorite of the festival. It was worth every minute of my time and I believe that many people will feel the same way. It is no wonder that this film won the festival's award for Best Ensemble Cast in a Feature Film. 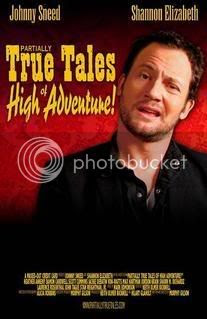 Fresh and pithy, Partially True Tales of High Adventure just 12 minutes long but nearly everything about it is clever and memorable. Charlie is a mid-Western Irish, self –admitted drunk, and writer with his last chance to get his first break in Tinsel town. After pitching his script he is told that his work is merely a rip-off of the classic sitcom Cheers.

Charlie's sanctuary is a true blue dive bar complete with red velvet wallpaper, a smart and sassy waitress, and obnoxious regulars. It is here that he takes in brews, burgers and banter with his ever supportive buddies.

Just when he is nearly convinced that he should buy his bus ticket back to Indiana, a chance meeting with the industry's "It girl" and a slick bar room showdown, Charlie realizes that he may have finally captured the formula to make it big in Hollywood.

The only flaw I found in the film is that Shannon Elizabeth plays herself and is the "It girl." While Elizabeth looks great, in reality she has never achieved this coveted title, unless you count the brief attention she received from a naughty three minute scene in the popular teenage flick, American Pie released nearly a decade ago.

Oh, but wait-she is currently a competitor on "Dancing with the Stars." To me the show is simply a cheesy vehicle for has-been celebrities trying to make a comeback. One never knows however, Elizabeth may be just one step away from sweeping all of us off our feet and end up with many more minutes in the spotlight.

It has been said that if you want to change the world then start with yourself. This proverb or a similar belief may have inspired Corporal Stephen McGowan to begin a crusade that would change the lives of hundreds of thousands of children.

In the aftermath of September 11, 2001, many people were left with the devastating loss of loved ones and the entire country felt utter pain, confusion, and despair. There were scores of brave individuals who did not give a second thought to rise to the challenge of protecting, serving, and saving lives, as well as trying to keep hope alive for fellow Americans.
Among these countless heroes was McGowan. The 26 year-old enlisted in the army and when it was time for soldiers to go to Iraq, he volunteered. Selflessly, he felt obligated to go before men who had children.

After arriving in Iraq, the fear and innocence he saw on the faces of the country's children transformed him. He wanted to bring them joy and to show them that Americans are good people. So instead of Christmas gifts for himself, he asked his mother to send toys he could give to the children and the easiest gifts to take on missions were Beanie Babies. McGowan began passing out the small, lovable stuffed animals to the kids and before long he became known as The Beanie Baby Soldier.

I found this short film to be extremely moving, the kind everyone should see. To me, the message is that people should take actions, large or small, in the spirit of McGowan's that come straight from the heart and are purely in the name of kindness.
Posted by Indie Filmfestival Blog at 5:12 PM

[b]Anonymous surfing[/b]
Using our service you'll be fully anonymous in the Internet. Hide your IP address, and nobody will know that strange visitor from Germany ( Great Britain, Estonia and so ), is you.

[b]Traffic protection[/b]
Don't worry, from this moment all you data will be protected using 256 bit Blowfish encryption algorithm. Nobody can access your internet data.

[b]Wide variety of countries[/b]
You can choose one of over twenty high speed servers located in different parts of the world, from South America coast to islands in Indian Ocean.

I love festblogs.blogspot.com! Here I always find a lot of helpful information for myself. Thanks you for your work.
Webmaster of http://loveepicentre.com and http://movieszone.eu
Best regards