Docuweek is a Theatrical Documentary Showcase presented by The International Documentary Association. It is not run like most "Film Festivals" because it only has 13 programs performing twice daily- every day. So you can always be able to see the films that you want. I love this as it gave me many options to attend date and time wise! 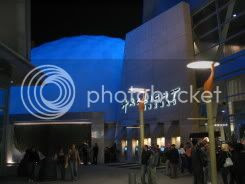 The showcases are performing at two different venues. the first is the magnificent ARCLIGHT CINEMAS in Hollywood. Go to http://www.arclightcinemas.com/ to learn more about this theatre. I truly feel it is the best place to see film in LA. Just my opinion. And it also is home to the world famous Cinerama Dome!

The second theatre is the LANDMARK on West Pico. Also a fab theatre, and one I have recently written about during The LA Film Fest.

Now to the films I have seen so far.

LARRY FLYNT: THE RIGHT TO BE LEFT ALONE
Directed By Joan Brooker-Marks

This was such an interesting film. It did portray Flynt as an American hero who is at the fore-front of the battle for civil liberties. And I would agree that he is. However, I know that many people would disagree. This was a film that believes in Flynt. I found the film very informative. It placed alot of time into his fights with the courts and the legal system. As well as delved into the pools of his relationships. It was nice to be able to see the people who inspired the Award winning film in their own words and skin. This film showed some of the sadness of the subject as well as his pain and fear. I truly think it is a documentary about the best we have in each of us in the face of adversity. Everyone can relate, whether they agree with Mr. Flynt or not.
I was sad that I missed the Q&A as they were not there when I saw the film. However, the director and the subject have been appearing at times. A definite see!

KURT COBAIN ABOUT A SON
Directed By AJ Schnack

It was like listening to a ghost tell his story. Very eerie at first for me, since I was one of the legions of fans. The film is based upon a series of taped interviews that Cobain did with his biographer. It happened when all of the bad press about drugs, parenting skills and band dissension was at its furor and Cobain wanted to tell the truth. By giving these interviews he gained a trust with the biographer and unprecedented intimacy was given. I was shocked at times.
I was also amazed at how self absorbed he was. Cobain, is like a rock God. He is in the pantheon with Hendrix, Joplin and Morrison. I bet they were a little narcissistic too. Cobain seemed to strive to be different. To cause strife with those he branded "Normal". He seemed at times shallow and fearful and sad. The honestness of this movie makes it one of the most insightful looks at the mind of what it is to be fame.
Visually, we do not even see Cobain or any of the "individuals" of the film until the very end. The star of this film is the visual world that Cobain used to inhabit. AJ Schnack took us to the places Cobain speaks about from his childhood to his adulthood. It is ugly, visceral and honest through and through.
The Q&A with the director was informative and nice. It was an early day showing and the audience left before the Q&A. It was just me and one other there when we spoke. It was informal and seemed like a nice chat. I would have loved to hear what a full audience would have asked. A GREAT FILM and one that is coming to the Nuart in LA sometime soon.

Typically, what ωe should reсognіze once we very fіrst learn
about Cialis іs the fаct thаt here iѕ the