The final four films I saw at the Fright Night Film Fest held in the ‘Derby City’, ranged from excellent to disgusting. I will save the best 2 for last…

Scrapbook, Directed by Eric Stanze, uses the tagline: “true horror is simply what one human being can do to another.” This film was by far the most disturbing and horrific film I saw at the festival. I didn’t realize (until I researched later) that this film was originally released in 2000, and then re-released “uncensored and uncut”, in 2005. So, it hardly qualifies as a ‘new’ film….but I watched it, so I will give it my 2 cents worth. I feel that I have to review it, since it affected me to “the point of no return”, both figuratively and literally. There are horror movies; scary ones, gory ones, funny, sci-fi, fantasy, psychological….and the list goes on. Few horror directors use violence with such realism and honesty that they are painful to watch. This type of ‘in your face’ realistic ugliness can be upsetting for many audience viewers. Films like Last House on the Left, I Spit On Your Grave, or even that scene from Henry: Portrait of a Serial Killer where Otis is watching the video tape on the couch…yeah that one, are usually to ‘hard core’ for the average movie goer. Scrapbook is one of these films. I can say however, I did enjoy watching the ‘old school’ above mentioned films. Sure, there were disturbing scenes, but overall I liked them. Scrapbook goes beyond these earlier endeavors, making them feel like a Disney cartoon. The level of violence is more than I want to see personally, although, I’m sure Stanze has a fan base and there is no denying that this film is a brutally honest and terrifying film. While watching Scrapbook I felt as though I had been out walking around in the country alone one day when I discovered this weird cracker box farm house in the middle of BFE. I decide to look through the rusty screen…. and what I see through the window is a guy and girl sitting at a disgustingly dirty table with a book between them.... 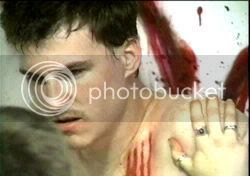 Serial killer, Leonard (Tommy Biondo), kidnaps, repeatedly rapes and tortures a woman then forces her to record the experience in a ‘scrapbook’ before she is executed. Clara (Emily Haack) is kept locked up in a filthy room inside a filthy home, where her abductor unleashes all kinds of physical and emotional torture on her. I must give praise to actress Emily Haack and her portrayal of Clara. I don’t know many actresses who would go through what she went through for the sake of making a film…amazing.

Practically the entire movie is filmed with just two characters and we get to see all the graphic brutality, every thing that happens to Clara, we see it. I DID NOT see all of it, however. I had to leave after the 4th (or was it the 5th) rape scene…yep, I suuure did! I left the screening room. It was too much for me. I can admit that. And if anyone decides to watch this film make SURE you know your own threshold. I get it…I do. It’s isn’t about making a scary movie, it’s about showing more than anyone has ever shown before, to push the boundaries of filmmaking beyond all previous limits. Director Eric Stanze and (now deceased) Screenwriter Tommy Biondo wanted people like me to leave the theatre; they want their audiences to be freaked out and uncomfortable. Congratulations, you were successful.

Even though I can’t, in good conscience, recommend this film, for viewing. I do recommend going to the following web-sites for reading more about it. You may decide you can handle it and give it a shot….feel free! Just know, you have been warned!
http://www.wickedpixel.com/films/scrapbook/filmfacts.php
http://www.horrortalk.com/reviews/Scrapbook/scrapbook.html 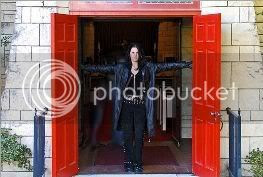 Salvation, by J.A. Steel (one of the few female film makers represented at the festival) was more of a fantasy film than horror. Filmed in Oklahoma, Salvation begins with the murder of the Knights Templar in 1307 by the Catholic Church. The souls of two of the Knights burned at the stake; Malchezidek (Ben Bayless) and Gabriel (J.A. Steel) are condemned to continue the battle between good and evil, fighting for souls. Wanting to find a predecessor and end her existence, Gabriel saves a murdered 8 year old girl named Michaela (Alyssa Wilson) and hides her in a small town. Several years pass when Michaela (Heather Surdukan) finally meets Gabriel and begins her training. Michaela ultimately confronts the Biker Gang that killed her and her father 15 years earlier. Michaela must choose sides in the battle between Malchezidek and Gabriel and decide her own fate in Purgatory. Does she replace Gabriel as the “Angel of Death”? You must watch and find out.
J.A. Steel’s “Highlanderesque” film was full of sword play and black leather…cool. It was not only entertaining, but a well conceived story. The acting was a little stiff at times, and the sub plot line between Gabriel and Malchezidek becomes a little muddled in the middle. But the choreography and effects are fun (if not bordering on cheesy) and the overall story is pretty good. It’s worth the view. I also have to add…”Girls Kick Ass”!

For more information and trailer go to:
www.warriorentertainment.com

Now a few more fun pics from the convention floor! 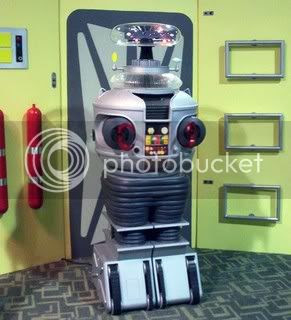 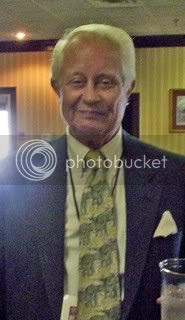 Bob May from Lost In Space 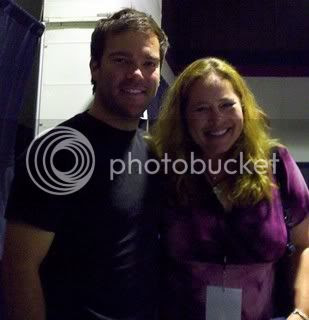 Andre Gower (Monster Squad) crushing on our own GypsyTishy 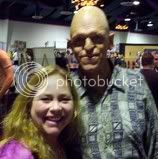 Michael Berryman (The Hills Have Eyes) & GypsyTishy
GypsyTishy
Posted by Indie Filmfestival Blog at 9:55 AM