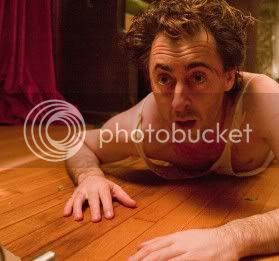 Suffering Man's Charity – Alan Cumming’s solo directorial debut also finds the exceedingly talented actor in the starring role as John Vandermark - a failed composer who makes a living as a music teacher, browbeating small children into submission during their lessons. Over the years, Vandermark has taken in the occasional struggling artist in hopes of buoying their career. His most recent “project” is Sebastian St. Germain (Buffy the Vampire’s David Boreanaz) a supposed author who not only has overstayed his welcome, but has wracked up quite a debt in the process. “He’s my cross to bear,” John says, “and he still owes me for the wood and nails!” The two come to blows eventually in a confrontation that sees the power struggle surprisingly victorious for the histrionic Vandermark, becoming Sebastian’s captor, while simultaneously discovering a repayment plan. This edgy, weird, stylistic feature is a mixture of slapstick, Sunset Boulevard, horror, Grey Gardens , gore, Ever Happened to Baby Jane, and Edgar Allan Poe’s The Raven. Cummings’ over-the-top performance is sensational, stating this is the closest he would ever come to being a Tennessee Williams heroine. He knew he had to make this film as soon as he read the script: “It made me want to laugh, cry and vomit all at the same time.” The movie also features cameos from Jane Lynch, Anne Heche, Henry Thomas, Carrie Fisher and Karen Black and was sponsored by Domicile Properties.

Joseph Krimple is a Mortgage Banker residing in San Francisco, CA. When not punching the nine to five clock, he's an avid film buff, devoted music lover, and wannabe rockstar. He can be reached at http://us.f573.mail.yahoo.com/ym/Compose?To=jkrimple@hotmail.com 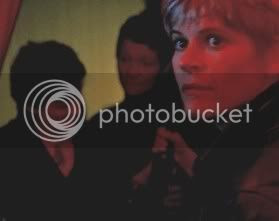 Finn's Girl- I went to see Finn's Girl tonight at the lovely Parkway Theater in my Oakland neighborhood. http://www.parkway-speakeasy.com/ This was not my first time to the Parkway and the venue is great – I thought the style and atmosphere were perfect for a festival screening with Q & A. This movie was surprisingly wonderful. The word that comes to mind repeatedly is multi-faceted.The film covers loosing a partner, raising a child both as a lesbian and after the death of a parent, reproductive rights, genetic research, growing up as a pre-teen in a modern setting, and the politics of it all. While I walked away feeling like there were strong messages in the film, the way the politics were presented was quite subtle and the story line and dialog stayed front and center throughout. The actors seemed to have a connection with the script and with each other. Maya Ritter, the young actress who plays Zelly, did a phenomenal job in capturing a pre-teen in a difficult position and shines throughout. Canadian film makers Dominique Cardona and Laurie Colbert were on hand at this showing and spoke candidly after the showing about their history, about the process of making this film from the 5 year writing process Laurie completed to the low budget, very personal making of the film which involved shooting most of the project in their own home.

annalea
Posted by Indie Filmfestival Blog at 10:13 AM