WHAT WE DO IS SECRET
The Landmark 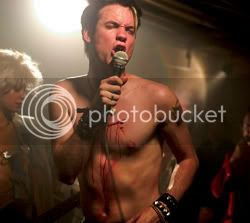 So, can I let you in on a little secret? You promise you won’t tell? Okay, well hear it goes. I have absolutely no interest in the LA Punk scene of the 1970s and 80s. None. Zilch. In fact, if you had told me that I was seeing a biopic about Darby Crash and the Germs, my initial response would be … who? It wasn’t until halfway through the film that I realized that this group was not a fictitious band used as part of a narrative device. Oops, somebody didn’t do his research. So, SSHHHH! Don’t tell. Well, okay, in fact you should tell. You see, that’s part of the reason why What We Do Is Secret, Rodger Grossman’s feature debut, did very little for me. I am certainly not the audience for it. However, that doesn’t mean it’s not for you, either. So, keeping that in mind, I am going to go back to a time-old technique that I was taught in fourth grade to use when discussing something that you really have nothing to say about. I can almost hear my teacher Mrs. Crouse’s singsong voice now. “Class, now remember, give two ‘positives’, and one ‘needs to work on’, all right? Begin.”

What We Do Is Secret is nothing short of a labor of love from so many people. It embodies the whole spirit of independent films. Grossman explained during his Q&A how the film took more than a decade to make. Production even stopped for over two years when money ran out. That was when Grossman said that he would not cut his hair until the film was completed. It’s shoulder-length, now. Grossman partnered with many of the original members of the band to ensure the truth of the work, and it is quite easy to see how much time and effort went into this project.

The cast is capable. Shane West is just fine as Darby Shaw. He holds the film together and is in virtually every scene. Rick Gonzalez is admirable as Pap Smear, and character actor JP Manoux practically steals the movie as radio host Rodney Bingenheimer in a scene that I was surprised to hear almost didn’t make the final cut.

My only fault with this film is I felt like I had been there before. It seems to follow the same formula as a lot of music biopics. The music sequences, which are well done and recreated, just seem to take slightly too long, and keep me from connecting to the characters. The film is well-made, but does seem to play it safe … if you can say that a film about Punk rock is safe.

But hey, you remember what I said at the beginning. This could be right up your alley. So, like all ‘secrets’, pass it on. 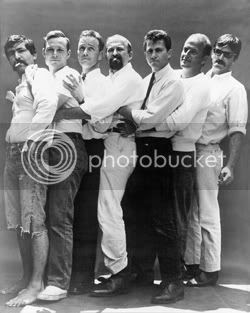 Directed my Morgan Neville this film is about the modern art scene in LA in the 50's and 60's and the people who fought to make it cool. Hell, they had to fight for people to even consider it art. LA was a wasteland for the new artists. However a man by the name of Walter Hopps changed the landscape of modern art by opening Ferus Gallery. With a roster of artis that included Billy Al Bengston, Walter Hopps, Robert Irwin, Ed Kienholz, Ed Moses, and Ed Ruscha. With rememberances by the artists and the people on the edge of this movement. Dean Stockwell, Dennis Hopper and Frank Gehry. What a strange trip down the memory of these peoples lives and experiences.
With every success their egos got bigger and the fighting and bickering got worse. The one thing that I found so interesting was the brotherhood they created in the begining. To cheer and egg each other on to bigger and greater things. It goes to show that with competition, talent can only grow! It was very interesting to see that their lives was like any soap opera. Divorce, wife stealing, mental illness and death felled the gallery and the end of the era.
Did you know that Andy Warhol's first show was at the Ferus gallery? His soup can paintings premiered and sold there. Walter Hopp's the curator told Dennis Hopper to not buy one. They we're $100. That was a bad decision. This is also showing on Saturday June 30th at 3pm with a Artis Reunion Moderated discussion at 4:30 with all the artists and the director.

OK! I can totally admit my geekiness. I will let my freak flag fly when it comes to Buffy or anything Joss Whedon! I NEVER missed this show when it was on TV. I would miss weddings, funerals, parties... No I am afraid I cannot come I like watching Buffy when it comes on. Of course I did not have Tivo back in the day but OMG I loved that show. When I saw that they were having this "special event" at the LA Film Fest of course I knew I was going.
I got in line over an hour early because the line was huge. And full of geeky fun. People were playing Buffy board games. They were talking about the new Buffy comic (Season 8) Thank you Joss! It was like a Buffy convention line.
When I got in my seat with my new best friend Nicci, who I met in the line and bonded over all things Anya (she is a character in the show for all you non-believers) We received a goody bag with things for us to use while we watched the show.
This night was like an interactive event. It was the same thing as a Rocky Horror Picture Show night only cooler for me cause it was with Buffy. We sang, we held hands, we screamed at Dawn, it was one of the greatest theatrical experiences ever! I thought WOW it is over it is 12:45am at night I am old and my partner is supposed to pick me up an hour ago (of course it ran wayyyy late. PRESHOW BABY!) But as I got to the back door I saw Jody (my partner) and he told me to look behind the theatre door. I peeked my head out and there was JOSS WHEDON! Marti Noxon was sitting right beside Jody and I melted down into a geeky nerdy pool of Buffiness. I stammered and he waved and put his finger to his lips. OMG he is gonna surprise everyone.... and he did. What a surreal night it must have been for him. He thanked us all and I knew it was time to leave. And so I slept with sweet dreams of Whedon floating around in my head.
Posted by Indie Filmfestival Blog at 11:46 AM