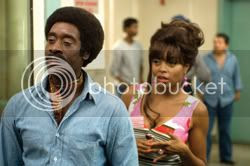 As a working mother of a 2 year old I don’t get out at night much, so I probably would have a good time at a radio station screening of Captivity (if it ever comes out). The chance to wear non-work, non-cleaning the garage clothes and go out alone with my husband is something special and unusual. Even though the film was 30 minutes late starting and I felt like a cow being herded out the door at the end of the show, we had a great time.

The Opening Night film was Talk to Me, about D.C. radio dj Petey Greene.
It follows the lives Petey and Dewey Hughes, his reluctant friend and manager, during the late 60’s. The stand out performances were the always brilliant Don Cheadle as Petey and Taraji P. (“It’s hard our here for a pimp”) Henson as his girl Vernell. She is an extremely talented actress and was the highlight of the film, she is cute and very, very funny. The very handsome Chiwetel Ejiofor played Dewey Hughes, Petey’s friend and had a real command of the screen. The cast is rounded out by Martin Sheen, Mike Epps, Vondie Curtis-Hall, and Cedric the Entertainer.

The film has a lot of heart, a lot of humor and has many touching moments especially surrounding the death of Martin Luther King, Jr. I credit director Kasi Lemmons with much of this. When she introduced the cast and crew before the film, she seemed like a person with a lot of heart and humor so of course it would carry over into her film. Unlike a lot of “period” pieces about our recent past I didn’t feel like they forced the era down your throat, i.e. let’s put funny wigs on people and play a lot of popular music of the day and they will know we are in the 60’s.
The party afterward was outside on Broxton and was your typical Patina catered, open bar, street party. Lot’s of people trying to look important while scoping the crowd for celebrities, (that’s what we were doing) while shoving free food in their mouths (that’s what we were doing too). The stand out performance in the food category was the flat iron steak sandwich and the chocolate dipped rice krispie treats. I am embarrassed to say that my inability to stay awake past 11 prevented me from partaking in the free drinks. We made a beeline for the food line, wolfed it down while gawking, made a pass through the whole party and left.