I looked up at the ceiling in the theatre right as the lights were going down and I noticed that there is a skyscape of constellations that are lit up. It was beautiful. there was even a shooting star. A nice way to start a film. And on we go... 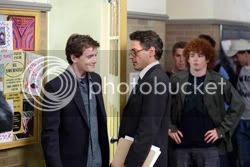 Charlie Bartlett is by first time director John Poll and first time screenwriter Gustin Nash. It has a fantastic cast with Anton Yelchin in a star making role as well as Robert Downey jr., Kat Denning, Tyler Hilton, And a breath taking performance by Hope Davis (when is she not breathtaking). It is a teenage comedy more reminiscent of the John Hughes movies of the 80's instead of the gross out humor of todays genre. However, to say this is like a Hughes movie isn't quite right.... It is like it is supposed to be. A compelling tight story that is well paced and shows what kid's can accomplish by simply listening to each other and helping out someone in need. Of course, like all movies about teenagers the kids think, act and talk like adults. This time though they are aware of the act and want to be "just kids"

It has a smartly written and very funny script. I laughed more at this than I have in a long time at a comedy. The story revolves around a young man named Charlie Bartlett. He is from a very rich family who has a counselor on retainer. He is his mother's conscience and pretty much takes care of her. When he winds up in public school, he craves the popularity that any teenager craves. He becomes shrink to the students with the bathroom as his office and the school drug dealer as the pharmicist. He becomes what he has always wanted and learns that fame comes with a price.

At the Q&A Anton, Kat, The director Jon and writer Gustin were present. They talked about it being their first film in their prospective roles. How Anton was always Charlie. Anton kept blushing whenever he got complemented and Kat I discovered was the daughter in 40 Year Old Virgin. When asked why he took the role he responded "I get to beat my chest, run around in my tightie whities, play piano and sell ritalin. I am so in!" The fun they had shows on the screen. They admit the budget is, of course, in the millios. However, they are an indie film. Just a very lucky one!

Go see this movie when it is released this summer. It is also playing June 28th at 9:45pm. I know that "Overture" is gonna try to go see it. I will make sure that he posts his comments too. Taking a day off tommorow to work on the website. Come back Thursday to hear about Wednesdays films.
Posted by Indie Filmfestival Blog at 10:08 PM