Opening night of the SF Lesbian and Gay Film Festival at the Castro Theater. 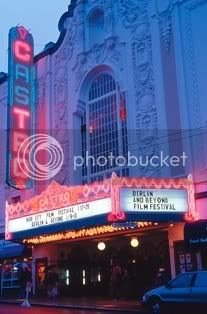 The place was sold out with movie types, chi-chi types, media, and the very hip. The screening started late and went into an anthology of frameline trailers from past festivals (the coolest one was a drop dead gorgeous sister rockin an afro, hitching a ride in the desert. She finally gets picked up by a Darryl Hannah-ish butch daddy on a motorcycle). Love it!

There was a notes and quieres period from Frameline President Linda Harris, in a seriously wicked suit (very dapper don this woman). She and Managing Director Matt Westendorf introduced the board of directors, gave praises to donors, staff, and volunteers to kick off the event. 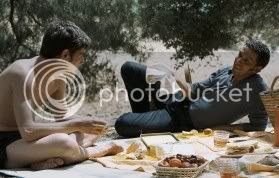 To begin, Les Temoins, a film about a gay affair at the onset of AIDS in 1980s Paris. Directed by André Téchiné, who co-wrote the screenplay with Laurent Guyot, this film is rich in style. The production design is excellent from the vintage 80s model Renaults to the interior color palette of avocados, oranges, and sunburst yellows (Spanish influence design trend at the time). The story is built around four central characters: Manu, a young boy from Lyon who joins his aspiring opera singer sister, Julie (Julie Depardieu) in Paris. He meets Adrien (Michel Blanc), an older gay physician; while cruising a local park in the shadow of the Eiffel Tower. Adrien introduces Manu to his friends Sarah, a writer, and her lover Mehdi, a Paris vice cop, both of whom just recently had a baby. Adrien falls for Manu, but his affections for him are spurned.

The narrative blazes through the ensuing love affair between Mehdi and Manu. Manu eventually becomes ill and abruptly breaks it off with Medhi; who ultimately reconciles his strained relationship with Sarah. Manu is taken in to convalesce by Adrien, himself consumed in a crusade against the growing epidemic.

Adrien is the most amusing characterization; his dialogue although sometimes clever, gets a lot of clichéd rhetoric of the 80s and comes across as disingenuous. My sense is this character is Techine’s alter ego (Téchiné himself is 54). One of Adrien’s best lines is, ‘…the one sin of gay men is becoming old.’