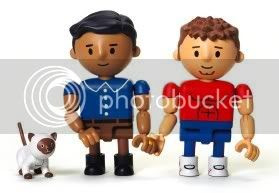 Rick & Steve the Happiest Gay Couple in all the World – this totally un-PC stop motion animated series premiering next month on LOGO is the latest project from Q. Allan Brocka (Eating Out, Boy Culture). This story of 3 little plastic couples living in their little plastic gay-borhood, Lahunga Beach , says everything about the queer community we all feel but could never say! Rick and Steve have been dating for seven years and are interested in a three way to spice up their sex life. Kristen and Dana have been together three drama-filled years and want a baby. Rick is Kristen’s first choice of sperm donors but Steve and Dana despise one another. Steve’s best friend is Chuck, a bitter, HIV positive, wheelchair bound, daddy-type whose partner, 19 year old club kid, Evan round out the cast of misfit gays. The show premiers on Logo July 10th, with six episodes total in its first season.

Joseph Krimple is a Mortgage Banker residing in San Francisco, CA. When not punching the nine to five clock, he's an avid film buff, devoted music lover, and wannabe rockstar. He can be reached at http://us.f573.mail.yahoo.com/ym/Compose?To=jkrimple@hotmail.com
Posted by Indie Filmfestival Blog at 10:24 AM