DANCES WITH FILMS DAY ONE

No Stars, No Politics, No sh*t. This is the mission statement of Dances With Films. One of the last true Independent Film Festivals. There are no studios, no big names behind or in front of the camera. No attitude at all from anywhere. The filmmakers are genuinely happy to be at a festival and the festival is happy to have you there. They are even making films at the festival. They have a 2 minute film contest where the filmmakers have 4 hours to write, shoot and edit a 2 minute film. I think I have found my new favorite festival. The festival itself is a piece of art. A bright shining example of what a true independent mind can create. And this festival has been doing it for ten years. I am going to try to get an interview with the founders of the festival, so look for that on the site soon.
Now on to the movies.......... 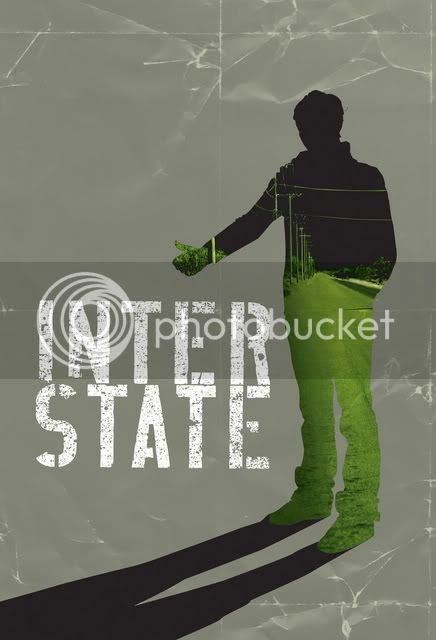 OK. So the entire festival takes place at the Laemmles. I love this theatre. It is one of the beacons for indie film in the city. And we have to few. As I sit in the chair I watched the pre-show that is playing and prepared by and for the festival. Please note: There is a filmmakers happy hour at CPK between 4-6 every day off the festival. i will be there! The music that is playing is from different films in the festival. Ok. That is cool too. And the movie begins.....

In the beginning I was a little like hmmm.....but after 5 minutes I was in love with this movie. Written, Directed and Edited by Marc A Samson, what a quirky little gem. A well conceived noir-esque thriller. Wonderfully written and shot in HD. The acting was good and at times unbelievably fantastic. Alexandra Ackerman gives a tour de force performance as the femme fatale. She was enthralling. Also great performances were given by Shiloh Fernandez and Jodi Stanford. 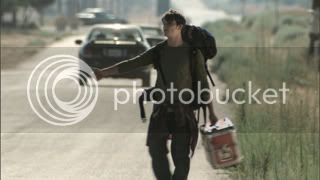 Imagine a trip down Route 66, where drive-ins, eccentric diners, fifties gas stations, and neon-striped Tiki motels still stand. This is the backdrop of Interstate, a hallucinatory journey across America into the bleak world of film noir. On his way to Los Angeles to meet his girlfriend, Edgar (Shiloh Fernandez) picks up two nasty-looking teenage sisters; Veronica, (Alexandra Ackerman) a "femme fatale" nightmare, and Gloria, (Jodi Stanford) a quirky acid head obsessed with snapping Polaroids. The journey takes a strange turn when Edgar involuntarily ingests drugs and becomes stranded with the girls in a seedy roadside motel. Strange revelations are made and Veronica finally uncovers Edgar's grim past. She verbally attacks him and blackmails him for everything he's got. 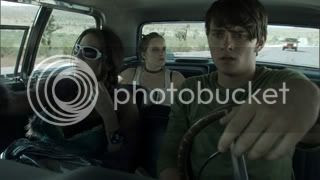 The way this story plays itself out is wonderful. The reveals remind me of an older style of noir. If you want to see the trailer or learn more about it go to http://www.interstatemovie.com/ 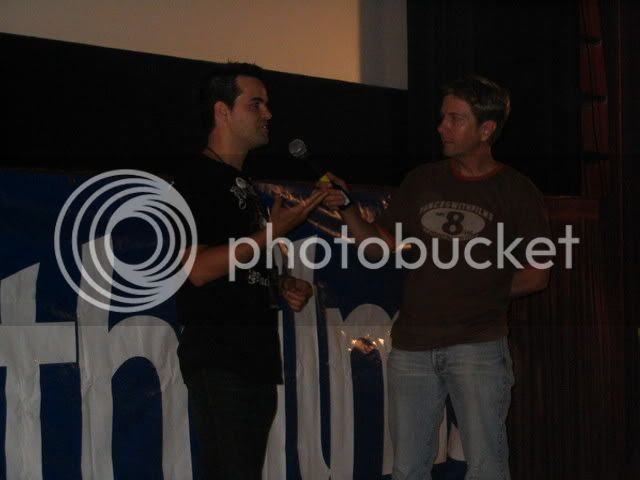 At the Q&A I learned a few fun tidbits about the filming process. Over 15 different endings were written for the movie. The actors rehearsed for 2 months before the camera rolled. The entire film was shot in 14 days with a crew of 13 and 11 actors. Some of the most fun images I have seen in a while on film, like Jesus Diner. A huge statue of Jesus holding a hamburger above his head with a smile was digitally done. I so wanted that to really exist LOL!

Go to this festival and see this movie if you have a chance. As far as I know it has not been given distribution. I hope that it does!!! 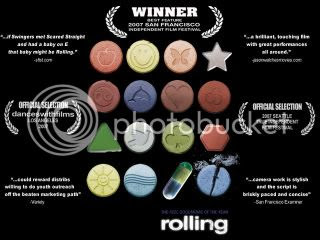 Rolling
Laemmle Sunset 5
Is this a documentary or fiction? That’s the question you ask as the movie begins its journey. Shot in a very documentaryesque style, Rolling follows the lives of seven strangers, who end up at a house and crazy things happen… wait, is this another MTV’s The Real World?... not quite. The movie is told through a series of what seems to be present day, flash backs, flash forwards, cross flash. I’m sure it was an editing nightmare, however, it worked. You go along and in the end, it all culminates in a nicely delivered package of: Here’s E (Ecstasy)—do it or don’t do it—it can be fun—it can be deadly. It doesn’t really make a strong statement one way or another… let me rephrase, it makes bold statements, but it doesn’t seem to have a strong opinion either way about the drug. You see the elation it can bring along with the nightmare. The stupidity and the naiveté, the thrill and the rush, the peer pressure and the pure need for relief from the world.

It’s the most uncomfortable I have felt in a film in a long time—uncomfortable in a good way. After the roller coaster ride, it’s just like at the theme park, you end up back where you started, armed with a little more knowledge and I guess a choice for some who haven’t ventured into the rabbit hole yet.

The actors delivered convincing characters that you believed were the real deal. The cinematography was a mixed bag of DV, 35 and 16, with some interesting textural choices adding to the overall look.

The post-party was held at Arena in Hollywood, but unfortunately I had to miss the festivities. On the way out of the theatre I ran into Quentin Tarantino (Pulp Fiction, Death Proof) and Eli Roth (Hostel, Cabin Fever)… uh, hello… The Friday night screening sold out. And a second screening was added on Tuesday, July 10 at 12:30pm. Take a long lunch… it’s definitely worth the ride…

RB
Posted by Indie Filmfestival Blog at 8:18 AM