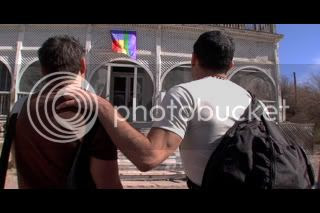 It was Friday the 13th at PIGLFF, and I knew that a film with such an over-the-top title such as this, was just the perfect film to end my evening. Boy, was I wrong. Now, I pride myself on always finding things to like within a film. I mean, I know how much hard work goes into making movies, and I am certain that everyone involved in the production have put forth a lot of time and energy. Having said that...... 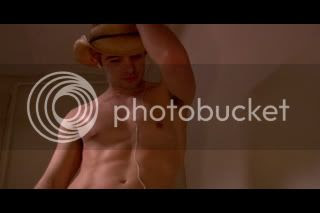 So, let’s sum up the plot, shall we? It’s the night of the big circuit party, and several couples forgot to book early. (Plot hole #1: What gay couple doesn’t book for a circuit party years in advance? I’m just saying.) But they’re in luck, because hours out of their way is a little B&B known as the Sahara Salvation Bed and Breakfast, run by the scripture-lovin’ Republican Helen, and her repressed daughter Luella. But what the guests don’t know is that Helen has a plan to convert a gay man into the perfect husband for Luella, or kill them in the process. But all hell breaks loose when a small group of Lesbians accidentally get in the books, triggering Luella’s lesbian tendencies. However, nobody is prepared when Helen and Luella’s deep-dark family secret, the caged Manfred, escapes and begins punishing the guests who are not right with the Lord.

I know what you are saying. ‘This film is just not for him’. Well, let me stop you right there. Half the reason I am so disappointed is that this movie IS so right for me. There is nothing I like better than horror films. Campy horror films are even better. Outrageous-over-the-top storylines are the best. I read through the film’s synopsis and get a smile on my face. I expected so much. But where this film really falters is in story and production value.

Let’s start with the story. There are some genius ideas at play here. I did find myself genuinely laughing at the family’s back story, and I could see where the jokes were going and could appreciate them. However, many of the B&B’s guests are characters that act in completely inexplicable ways. Without giving away anything, the entire ending of the film comes out of the blue. It feels like writer and director Jaymes Thompson, always wanted to end his film this way, but had no clue how to get the characters there, so he just wrote it in. Disappointing.

Now, I will not knock this film for having poor production values that are the direct result of budget. My issues with the production is with the way the film is cut. We see a character tied to a bed and a door slowly opens, cut to another scene. What feels like twenty minutes later, we finally go back to the character and the door starts to open again. WHAT? 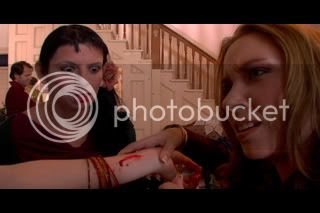 One character is terrorizing another in one scene. We leave that scene in mid-torture, only to find the SAME CHARACTER out talking to people in the lobby. WHAT?

Okay, I will just leave it at that. On, PIGLFF’s web page, people have already commented on this film. "That was the funniest movie I’ve seen in a long time," writes one reviewer. Another reviewer adds "I haven’t laughed so hard at a movie in years! I’m going again on Saturday".

So, maybe I am wrong. Check it out, if you must. But just know this, "The Gay Bed and Breakfast of Terror’ is a B&B I will not be checking into for a very long while.
"Overture".
Posted by Indie Filmfestival Blog at 8:22 PM