With a lot of Glitz, Glamour, and just the right amount of cologne, the 13th Annual Philadelphia International Gay and Lesbian Film Festival launched Thursday night. Democratic Mayoral candidate Michael Nutter welcomed the audience to the festival. Reminding everyone that Philadelphia would be nothing without its diversity, Michael Nutter proved once-and-for-all that there is truth behind the famous slogan ‘The City of Brotherly Love’.

PIGLFF’s opening night celebration preceeded with a screening of the romantic comedy "A Four Letter Word". Director Casper Andreas’ stand-alone story, is really a continuation of characters from his debut film "Slutty Summer" which played many-a-film festival last year. This time the story focuses in on Luke, deliciously played by Jesse Archer, who is content with his many one-night stands until he meets Stephen (Rising Star Award Winner,Charlie David) who completely throws Luke’s world in a spin. Stephen claims that Luke is nothing more than a Gay Cliche, living his life day-to-day, without even a thought of the future. Determined to prove Stephen wrong, Luke finds himself at Sexual Compulsive Anonymous meetings, in soul-searching conversations with friends, and taking life more seriously. However, when he discovers that Stephen has misrepresented himself, Luke finds himself at a crossroads. Does he continue to discover all that life has to offer, or does he revert back to his party-boy way? . 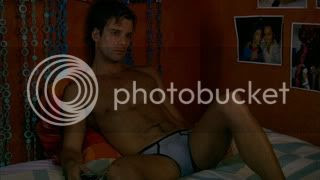 I found "A Four Letter Word’s" campy humor a sweet distraction to the serious themes addressed within the movie, and surprisingly the balance between the two of them work. Jesse Archer gives 100 percent to his character and his story arc is completely believable. I believe that the pacing falls short in the movie’s middle, making it feel longer than its short running time. However, for a romantic comedy with a lot of substance, I have my own four-letter word for this film: "Good". Well, okay, "Pretty Good" is a better way to sum it up, but it’s not as catchy now, is it?

"Overture"
Posted by Indie Filmfestival Blog at 9:28 AM