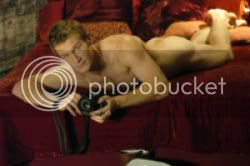 2 MINUTES LATER
Okay, I didn’t hate it, I just didn’t get it. And after it was over I was wishing it had only been 2 minutes long, because I was really not into it. It was like a bad episode of Charlie’s Angels… it there is such a thing. I wasn’t sure if it was supposed to be tongue in cheek over the top or if it was trying to take itself seriously for the longest time. It reminded me of that landmark film starring Elizabeth Berkley and Gina Gershon. Only with less T&A and a whole lot more PENIS!!! Lots and lots of penis! Did I say it had penis in it? If you’re looking for the titillating taliwacker tour, director Robert Gaston delivers along with a story line about a twin who impersonates his twin brother to join forces with a female private investigator to track down his brother’s killer. The film has its moments and will definitely appeal to many a camp enthusiast.