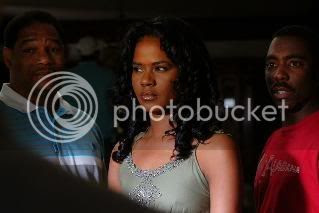 A TV talk show host, Stormy La Rue has made it big in the local scene of Chicago and is about to go National… Sound familiar? Paying a little homage to Oprah possibly? But she receives devastating news that her Nana, her grandmother who raised her, is practically on her death bed and so she heads home to take care of things. She plays a dangerous game of roulette when she decides to be the make a wish foundation, and offers up that she is getting married, making her Nana a happy woman. And we’re off and runnin’ to get to the alter…she auditions many a man to be her Prince Charming, and finally hires a male stripper to fill the bill. But this Cinderella doesn’t have it easy, with a conniving stepmom (the Producer of her show) and the two ugly stepsisters, or cousins—who, by the way, practically steal the show; they were hilarious… I see a sequel or TV series with those two. Her fairy Godmother (or godfather) comes in the form of Peanut, an old school chum who has always been in love with her.

It’s a fun movie with lots of laughs, some tedium, but overall it was pretty well put together. I thought the DP did an excellent job. Very well shot.


RB
Posted by Indie Filmfestival Blog at 9:22 AM