Day 11- Music Video's a Zombie movie and the Closing night Festivities!
A lot to cover!

I saw 19 different music video's. The one thing that I noticed from most of the videos were that they looked like they were on speed. So let the blurriness and head trippiness begin. I am only going to talk about the four videos that I am singling out as 19 is well quite a few!

I have seen this video often on NewnowNext on Logo. Directed by STYLEWAR. What a fun song and video. A metropolis is being constructed around them as they play. Their instruments and their feet can wreck havoc on a world built in miniture. The reactions of the tiny people are great! What a fun video.

A BOY FROM SCHOOL-Hot Chip

Directed by Garth Jennings. The entire video is the creation of a massive work of art. Without any paint they create a huge canvas using blow up toys, and fabric. The humans that are added finish the piece off. I was enraptured watching the process.

Directed by Joseph Kahn. This is truly a short film set to music. It is a spaghetti western in the classic style set in the future with a tad of Kung-Fu movie thrown in. It was alot of fun! 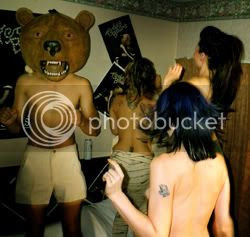 A VH1 mockumentary about the band. Like a Behind the music. With drugs, sex, alcohol and the redemption. It was alot of fun. Especially since they were giant bear heads on their skinny rock bodies. That alone: Priceless! 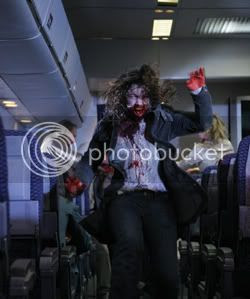 Here’s my list of things to do before I die.

Backpack across Europe.
Skydive.
Take in the wonders of the Mona Lisa
See a friend play a zombie in a Living Dead movie.
Go to ….

Whoops, wait just a minute. I think I can cross one off of my list. In fact, I know I can! I went to see Flight of the Living Dead not knowing at all that Brian Ames, who a little over a year ago did a staged-reading of a pilot I wrote, was costarring as a girlfriend stealing frat boy at 30,000 feet. So, I have to give him kudos. And for all you filmmakers out there, he is a very cool guy who has had a couple of national commercials in the past year and you should check him out. He has no clue that I am writing this, either.

Anyway, now back to our in-flight entertainment. Flight of the Living Dead (which I suspected only existed due to the playful title, but didn’t have the balls to ask at the Q&A) is directed by Scott Thomas. It is a playful B movie that will meet the expectations of Living Dead fans everywhere. It tells that ever-believable tale of zombies attacking a group of passengers onboard a LA plane bound for Paris. What this movie really was missing was Karen Black. I am telling you for the first fifteen minutes it felt like Airport all over again and I was right there with them. But the film slowly begins to suffer.

The pacing in the first forty-five minutes of the film is completely off. Sometimes long pauses between line readings made me wonder if this was used to develop suspense or if the actors may have forgotten their lines. Not something you want to wonder when you are supposed to lose yourself in a cheesy movie. The audience waits a good 45 – 50 minutes before the zombies attack. Not something you want from a Living Dead movie either. However, when the mayhem begins, it is a hoot. I have to say, I do get confused though in Living Dead movies as sometimes characters whose heads are blown off seem to reappear again, head intact. This is not a criticism of this film in particular, as it seems to happen in ALL of these movies. Am I just missing something? Oh, I know what it is… I’m just getting older. I have that questioning old-man syndrome.

I should just sit back in my seat with my seatbelt firmly fastened low and tight across my lap, and relax. I tend to like the aisle seats the best.

The LA Film Festival closed with a bang, on the screen at least. The closing night film was Sunshine, by director Danny Boyle. It takes place many years in the future, the sun is dying and the earth has sent a team to reignite it. This film was suspenseful and claustrophobic. The claustrophobia was emphasized by the tight seating at the Wadsworth Theatre and the fidgety guy next to me that must have eaten a bag of wrapped candy during the show. We lucked out and sat in some reserved seats. We were front and center for once instead of back and side.

Danny Boyle does know how to make you uncomfortable with films like Trainspotting and 28 Days Later. I am not a huge fan of these sort of space movies, Alien, Armageddon, etc., so this movie made me very uncomfortable. It is really cold on earth, the sun is going out. The Icarus II (this ship is doomed from the beginning with a name like that) is flying towards the sun to let loose a gigantic bomb the size of Manhattan in hopes of reigniting it. Just imagine being in a confined space for 16 months with 7 of your co-workers, strapped to the back of humongous bomb. I think I would volunteer for a suicide mission at that point. Of course someone is going to go crazy and everyone or almost everyone will try to be a hero. This film was rather formulaic, talking computer, multi-racial cast, creepy hallways, but it was entertaining and the cast produced some great performances. The only one who was recognizable to me was Cillian Murphy, his piercing blue eyes make you always wonder if he is really a bad guy.

Before the film they presented some awards for best documentary, best short etc. I don’t remember what they all were, but I am sure there will be a list posted somewhere.

The party afterward was in the backyard of the Wadsworth. It took a while to file in, but once inside it was very cool. There were igloos filled with pillows scattering the lawn, lighted cube coffee tables and stand up tables with lights inside. It created a very unique atmosphere. The sponsor was Sauza Tequila, so the drink of the night was margaritas. I had one, my first cocktail of the festival, took a couple of sips and threw it away. The food line was very long, but worth the wait, we had some nice salmon salad, very moist chicken and smelly peach cobbler (too much clove). We sat on a curb because all the tables were filled. I never really noticed people’s pants and shoes before. Some people wear some ratty clothes. We had a great time at all the films we attended, they were all unique and overall very entertaining.
Posted by Indie Filmfestival Blog at 1:24 PM