This was the last shorts program that I was going to get to see at the festival. Once again, let me just say how much I love the short format in film. I truly think it is a shame that the only place you can see these wonderful pieces of art are at film festivals. I so wish that they would screen a short before features. I am forced to watch commercials, why can't I get a little more enjoyment at the movies by watching a short. I will not get into the evil of commercialization but I REALLY HATE IT AT THE MOVIES!!!!! Hence, my love of all things film festival! So here we go...

THIS IS ME, directed by Sam Arthur is a sweet and quick film told from the perspective of a man who is in a coma. It is about how he managed to be in the predicament that he is now in. Lets just say it involved a tiny plastic airplane partially digested in a little kid, a plane flight, dry ice and a spilled drink. All the while he was just sunning himself in his back yard. Shame it was on the heathrow flight path. A truly cute film.

TRIPE & ONIONS by Marton Szirmai was a very funny film. Although, for me it was hard to watch. I find it kinda gross to watch people eating and this movie had it in spades. However, the joke at the end makes the rest of the film.

QUINCY & ALTHEA by Doug Lenox is a wonderful comedy about surviving the disaster of New Orleans by sparring with your lover. A couple married for many years decides that they now hate each other because they blame the other for not evacuating when they had a chance. As they search the city for meaning, or a divorce, they re-discover the spark in each other. A truly wonderful film, where hope is shown alongside the destruction, and the only way to survive is to laugh.

GOODNIGHT VAGINA by Stacy Sherman & Brie Turner-O'banion is a fun farce about a woman who wants to get a new vagina installed. A prettier one. Wonderfully played by Cheryl Hines, this short film is alot of fun. My only fault was I wish it had another minute of story. The ending felt a little rushed because I did want more. What a great cast. This is a wonderful film that you should see because it is the only film I know that has a funeral for a vagina. LOL! Produced by Steakhouse, who has also done For the Love of Dolly and Billy's Dad is a Fudgepacker. This is another gem to her credit!

YOUR'S TRULY by Osbert Parker is a pop painting come to life. This animated film noir is a delicous piece of filmmaking. It has all the makings of your classic noir story. However, in this twist to the classic it is her cooking that brings about her downfall. GO SEE THIS! I will keep my eye on this director. 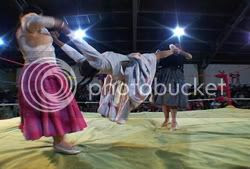 THE FIGHTING CHOLITA'S by Mariam Jobrani is a story of the power and strength found in the most interesting of places. In Bolivia tehre is a group of women who wear layered skirts, long scarves, they braid there hair and wear bowler hats. They are called Cholita's. A senorita wears pants. A Cholita holds to traditions. These Cholita's though are not scared to break from their traditions. They fight in the wrestling ring! What a fantastic mini documentary. I truly enjoyed watching and following these women. Most of whom are single parents living life as best as they can. They are just like the WWF! They have good guys and bad guys. It is a character they put on and one they play very well. I would love to see this expanded into a feature doc.

I MET THE WALRUS by Josh Raskin is an animated pen sketch film set to a recording of an interview with John Lennon made in 1969. I love the pro peace message and to use a completely OVERUSED phrase. "Now more than Ever!" it is a message that we cannot hear enough. What a very nice film.

The last movie of the night was NAGPAPANGGAP or PRETEND by Debbie Formoso. Shot in her native Phillipines and subtitled in English. It is a period piece that uses the melodrama of the genre very well. Nice acting and beautiful camera work, the film ask's the question: What does a woman do when her husband is cheating and it is culturally expected? How do you tell your heart to ignore it?

The next film I saw was at a brand new theatre here in LA. The Landmark on Westwood and Pico. Made to be alot like the Arclight, you can reserve your seats.

For me this was the most enjoyable film at the festival. Written, directed and starring the enormously talented Scott Prendergast. This film was championed by Film Independent's Labs. And what a wonderful film!
Based on the true story of when his brother went to Iraq and he moved in with his sister in-law and nephews to help out. There is where the reality ends though. What follows is a wonderfully sweet, hilarious ride of people coming to terms with themselves. Lisa Kudrow is, as always, one of the best actresses working today. She is a voice for the indie film and just amazing in this movie. I loved that he finds strength and power in a blue suit that looks like a baby with a giant head and no features. A blank nothing of a Smurf! Funnily enough it seems to be a mirror image of him in the begining. The growth of the characters is what drives this quirky story. RUN TO THIS MOVIE. Hopefully it gets a good release.

During the Q&A which was almost as funny as the movie itself. I learned that Scott has had 2 short films here at the LA Filmfestival. In 2002 Anna Being Stalked and in 2003 Delicous. He is someone that we will see a lot more from.

Time to go to bed. And dream of smurfs in my head!
Kristoffer
Posted by Indie Filmfestival Blog at 10:51 AM